Car owners often confront situations in life when they need to jumpstart their car or bike. It is not that difficult task and thus, the guidelines should be maintained to prevent stranded situations. Jumpstart may not be difficult but if you fail to do it in the correct way then things can fall out of hand and sometimes leading to hurt yourself. If you are not confident enough consider calling car inspection services or bike inspection services as per your needs. One of the best rules of thumb is connecting the positive hook (red cable) to the dead battery and then to the live battery. Follow the same instruction with the negative hook (black cable). 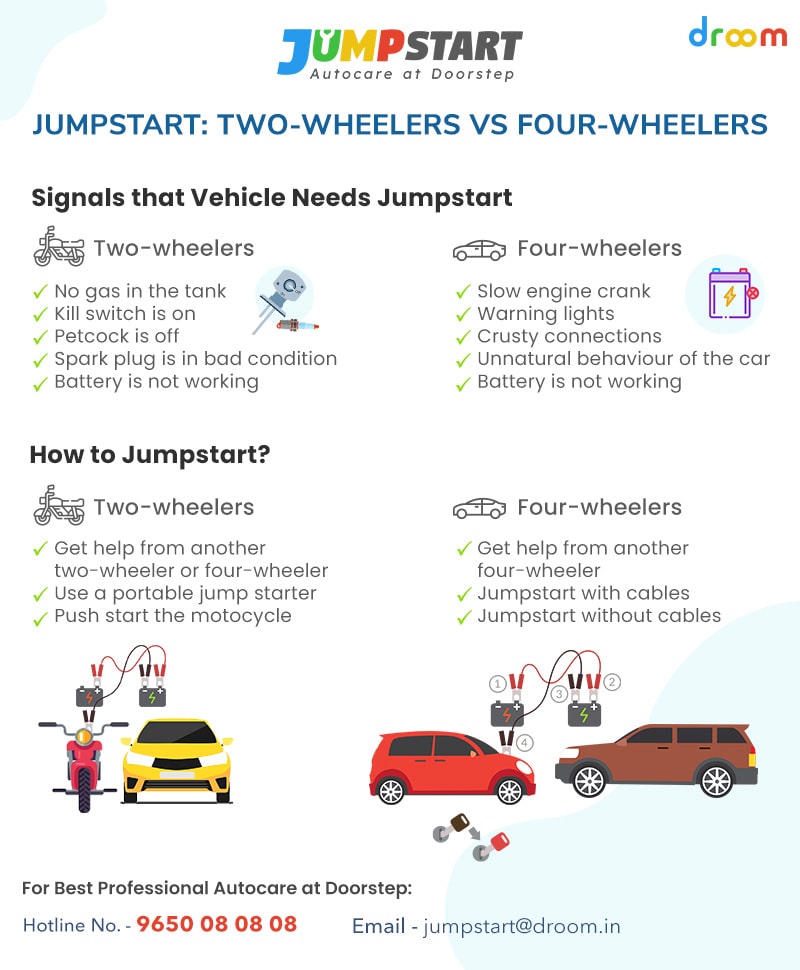 How to Start Motorcycle After a Long Pause?

After a prolonged lockdown, your bike may face a problem in starting. There can be several reasons when a bike doesn’t start. So, it’s good to discern the cause before jump starting the motorcycle. Consider checking:

You can also put your bike on neutral and/or pull the clutch as some bikes come with built-in safety to prevent the accidental start of the engine. After checking these key points if the problem still exists, it’s time for jumpstarting the bike.

A portable jump starter can be a good idea for jump starting your bike. You can also keep some essential tools along with you while riding on a bike. A portable jump starter and a moderate toolbox can mean a lot during solo or long-distance rides. You can jumpstart a motorcycle either from a car or a bike (luckily if it’s not a deserted area). However, in such cases, you can always call a professional team that is equipped to deal with such a situation.

However, keep in mind that the capacity of a car battery is higher than that of your bike’s battery. So, there remains a chance of damaging the electrical system of the bike in case you are using a car battery to jumpstart your bike.

Before jump starting your car look for signs to understand whether or not, the battery is dead. These are:

How to jump start car?

Like two-wheelers, there can be different reasons if your car doesn’t start. Whatever the reason is, it is a feeling of sinking and annoying. If you are not confident enough to find the issues, consider calling a car inspection service to find out the problems easily and deal accordingly. However, if you are sure of a dead battery, follow these key steps to chargeback and get the wheels rolling.

If you are still not sure how to jump start car get in touch with an enhanced team of mechanics who can come to your rescue whether it’s a four-wheeler or two-wheeler. So, whether you’ve a two-wheeler or four-wheeler, don’t get annoyed. Contact experts to get professional help at our number or write at our email id. 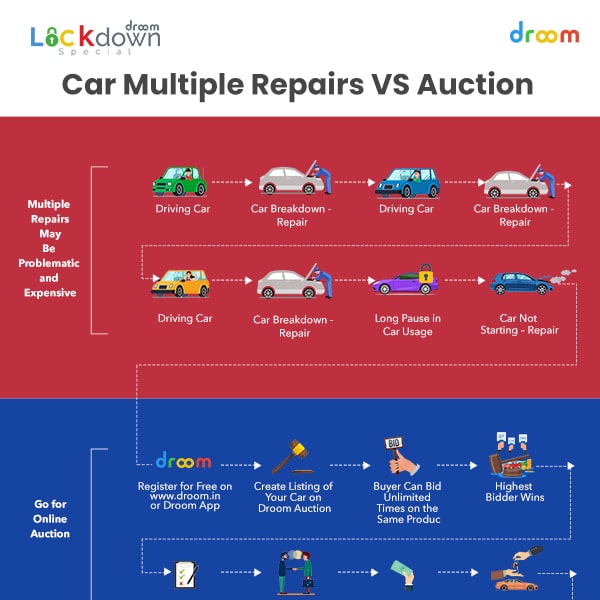 CAR MULTIPLE REPAIRS VS AUCTION: WHAT SHOULD YOU DO?

What Will Be Your Travel Diary Post Lockdown: Train, Bus or Own Car? 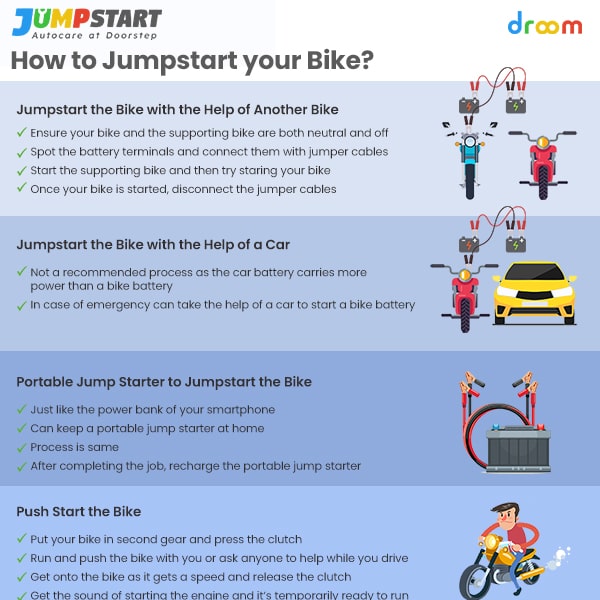 How to Jump Start your Bike? 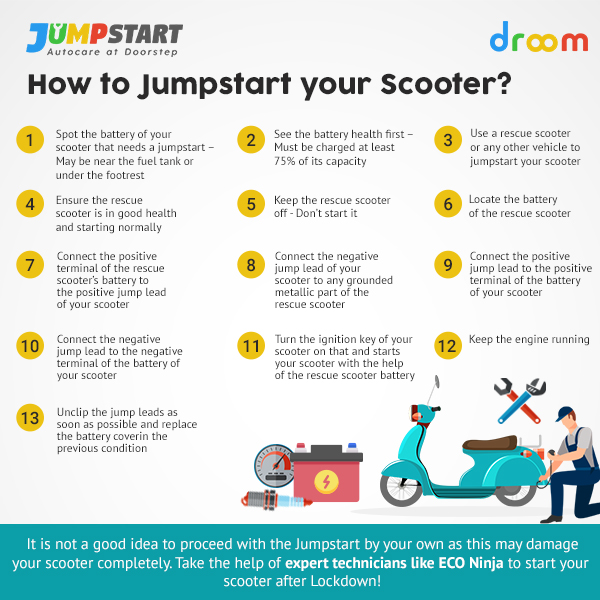 How to Jump Start Your Scooter? 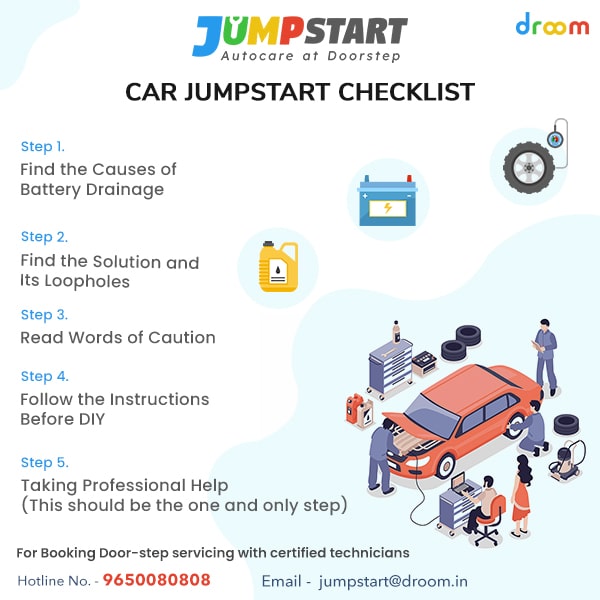 How to Get Jump Start Services for My Car? 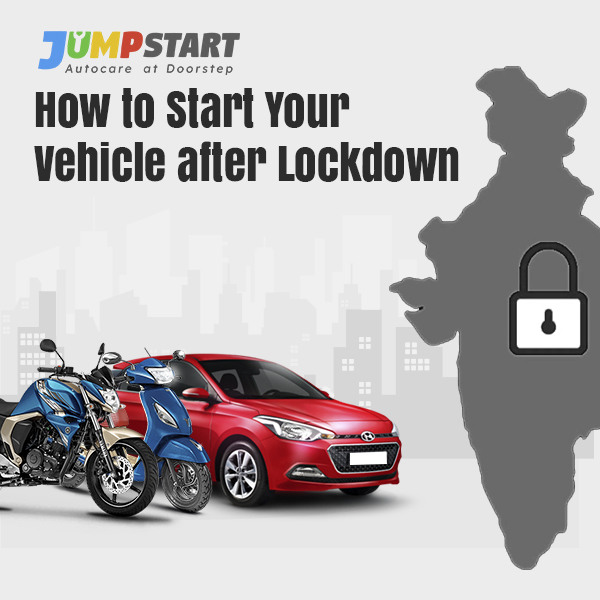 How to Start Your Vehicle After Lockdown?

There are high chances of draining your vehicle battery during the lockdown chapter. ...