What is that one thing that has almost always been our last judgement parameter before buying that new car? Why, it is the test drive we get to take! And most chances are, these test drives have influenced your take on the car to be a cent percent sure about getting the car or otherwise. But the test drives can become pretty troublesome when the salesperson that tagged along with you for the test drive keeps talking when you are just trying to get the hang of the car! And that is why the car market has been witnessing a new pre-sales trend lately, which has now turned into a war. The war is ? test drive vs test own.

So what exactly is this scheme of test owning a car and how is it any different than a test drive? Let’s find out!

What is the difference between test drive and test own? 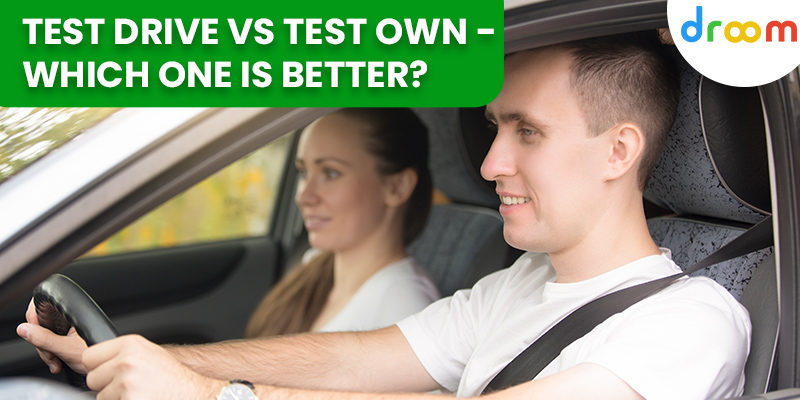 Most people must be pretty familiar with the concept of a test drive of a car. It is essentially when you are interested in purchasing a car, so you get to drive it around for some 15-20 minutes, under the supervision of a salesperson. You are given a fixed track where you can take the car for a test drive in most cases.

However, there are tons of problems associated with a test drive, and most users agree that the few minutes of driving the car are usually not enough for them to make a decisive call! For example, you don’t get to check the driving experience of the car on your usual routes, say the road to your office, or to the gym. Additionally, the time isn’t enough to get used to the controls of the car, the infotainment system, or even the seat adjustments! To top all of that, if you happen to get a salesperson who keeps bugging you throughout the drive, your job becomes all the more difficult!

And that is why the test own scheme was introduced in the car market and has been creating quite a buzz lately. When you opt to test own a car, it basically means that you can purchase the car for the time being, use it for some days (usually 7 days) according to your wishes, and return the car for the money if you are not satisfied with the performance.

Test owning a car is becoming popular because you get to have an actual hands-on experience with the car on the routes you follow on a daily basis. You can drive the car around the city and on the highways and check the real life capacity of the car. Since you basically own the car, you get the freedom to explore the infotainment system, adjust the setting of the car to your heart’s content, and be perfectly sure of your choice. And in case you don’t find the car suitable for yourself, you can opt for a return of exchange!

Which One Should You Prefer: Test Drive Or Test Own The Car?

Since test owning a car is still a relatively new concept for the car market, it would take some time for the market to completely adapt to it. Hence, most of the new cars do not come with the scheme of test own. This is because the first few kilometers run by the car are some of the most crucial ones. It is true for used cars as well.

So, as long as you get to test own a car, go with that option!

The option you choose would depend upon the condition of the car (new or used), and the seller you are purchasing it from (private seller or a dealership). However, if you do get to test own your car, it would any day weigh over the benefits of a test drive!

The traditional or the old route to buy dream car used to start ...

Tech innovation and its subsequent integration to pave way for simplified car buying ...