When we start talking or imagining about automobile in India, the very first name that comes our mind is Maruti Suzuki. The brand name does not start with alphabet A, but still automobile brand name list always starts with Maruti.

They had a market share of 56.21% in 2017. Currently, they are the most selling car brand in India. It is estimated that more than 50% of passenger car owners in India have Maruti Suzuki cars. Well, there are a lot of factors behind their success which we are going to discuss. So, let’s get started!

Why to Buy Maruti Suzuki Cars? 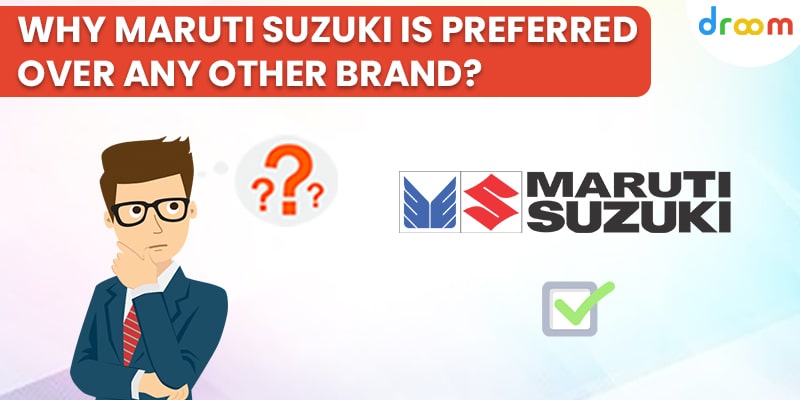 India had a minimal number of car owners before the arrival of Maruti Suzuki cars in the market. It was because the people’s standard of living was not so high and the cars available at that time were expensive. After they entered the market, Maruti Suzuki launched their Maruti 800, which became a game-changer.

It was priced below one lakh. The Maruti 800 received a tremendous response and was named ” A common man’s car” because of its affordability. Since its launch, 2.66 million units have been sold in India. That’s huge, considering the economic conditions of India at that time. Maruti 800 has the most selling car model in India, and their record is broken by another Maruti Suzuki car named Alto. Alto broke their record in just 15 years after its launch, recording a sale of 2.9 million units.

Even in the premium car segment, Maruti Suzuki cars were cheaper compared to their rival companies. The aggressive pricing of Maruti Suzuki cars paved the way for their success, and they are continuing it even today by introducing budget-friendly hatchback cars for the Indian market.

Fuel price has always been a topic of concern for car owners, especially in India. Even car makers were affected by it. Mileage became the most crucial criterion while buying a car.

Taking advantage of this situation, Maruti Suzuki launched CNG fitted variants of their models. However, Petrol and Diesel driven Maruti Suzuki cars offered pretty good mileage. The inclusion of CNG-fitted vehicles turned out to be a standout. Soon, they became the brand of middle-class people who aim at keeping the cost as low as possible.

Every asset needs maintenance as your car does. Like we know, some cars have way more high maintenance costs compared to their price. For this reason, people think twice before buying a premium car. Not in the case of Maruti Suzuki! Being manufactured in India, the spare parts of Maruti Suzuki cars are readily available in the market and at a reasonable price. Also, they have their service centers scattered around the corners of the country that provide excellent after-sale service.

If any brand has the best resale value, then it means there is high demand for their products; the same goes for Maruti Suzuki. They offer an excellent resale for their cars which is nearly 35%-50% or more of the cost price even after 3-5 years. This allows people to buy their product and upgrade to another model afterward by selling it at a decent price. You can check with OBV, the fair market value of a used Maruti Suzuki car.

These are a few reasons why Maruti Suzuki cars are preferred over any other brands. The deep market study and consumer analysis have led to this result. Now being in the automobile industry for almost 40 years, there is definite goodwill of the brand they are maintaining. On asking the reason for their success, they say, “It is the love of Indians for their cars.”